Gale force winds blowing across Scartaglin last Saturday Night had little or no impact on the inaugural Sliabh Luachra Young Musician of the Year Award. The evening was a feast of musical riches demonstrating that the unique Sliabh Luachra stlye is in safe hands.

This joint project focuses on promoting awareness of the unique repertoire of Sliabh Luachra music as well as fostering the next generations of musicians.

‘We are proud to support this initiative,’ stated Cllr. John Joe Culloty, ‘the Councils recognise that music in communities helps keep communities alive’. He praised the standard of the musicians on the night and also thanked Bridie Garvey and Tom at the centre for hosting the events; tea and brack was served after the performances!

Both Cllr Culloty and Cllr Collins commended the work by the Arts Officers in Kerry and Cork, Kate Kennelly and Ian McDonagh. ‘They work extremely hard, as I know from experience, they promote arts across the county working with individuals, groups, festivals, venues, schools and organisations. They are dynamic and fight for the arts when so many other demands are made on Council resources!’

Minister Deenihan said that the reach of Sliabh Luachra music is across the globe. There is great interest in the music style and music masters over the decades. He thanked the performers and audience for their continued support of the Sliabh Luachra Music Trail.

As Bridie Garvey pointed out there were two people present on the night not to be envied, the adjudicators; Paudie O’Connor, box player and Connie O’Connell, fiddle player. Theirs was a difficult task, the finalists were outstanding. It was not an easy decision; the standard on the night was inspiring. After much deliberation the inaugural award was given to a very deserving Bryan O’Leary.

Kate Kennelly thanked the members of the media present stating that raising the profile of such events, the talent and skill of our young musicians is truly important.

A number of festivals, music masterclasses and sessions will take place in the Cork and Kerry Sliabh Luachra area over the coming months; the Sliabh Luachra Young Musician of the year, 2015, Bryan O’Leary will be performing as will the other finalists. Bryan won €500 and the organisers are looking into a possible link with a music trail in America. Minister Deenihan said he would love to see the winner playing at prestigious traditional music festival, part of a similar music trail abroad. ‘This is world class music; it shows people across the world the value of our music and culture’. 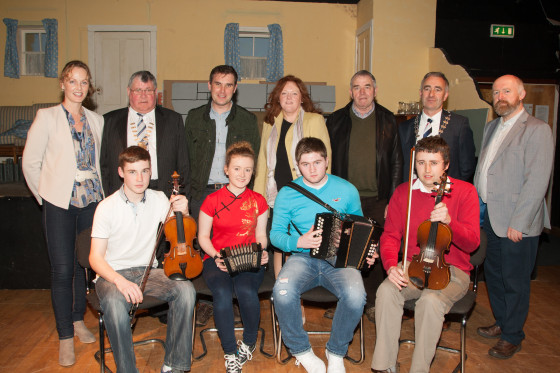 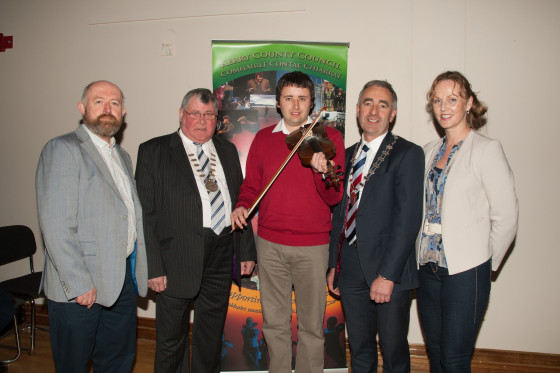 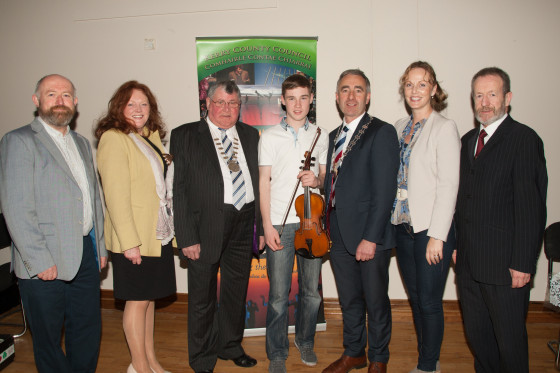 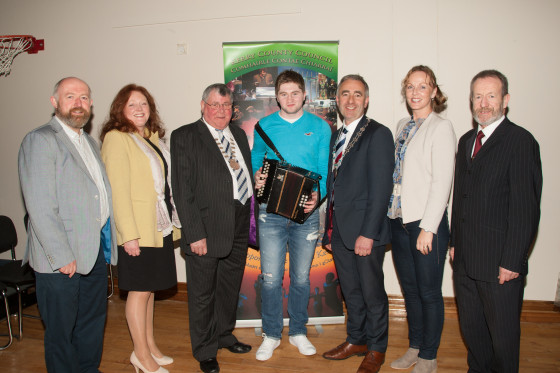 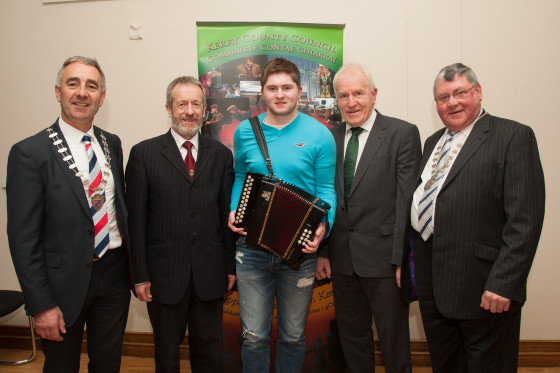 Bryan O’Leary, Gneeveguilla who was the winner of the Sliabh Luachra Young Musician of the Year at The Scartaglin Arts Centre, on Saturday night with Bryan after was John Joe Culloty (Cathaoirleach of Killarney Municipal District), Sean Kelly (MEP), Bryan O’Leary (Young Musician of the Year), Jimmy Dennihan TD (Minister of Diaspora) and Timmy Collins (Deputy Mayor of Cork)